Stamping out Human Trafficking in Reading 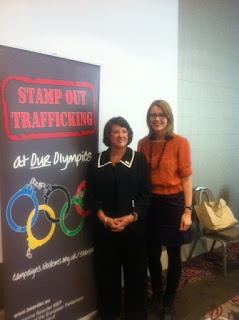 Back in October I attended a Conference organised by Lib Dem MEP for our area, Catherine Bearder, on the subject of human trafficking.

It included some truly shocking presentations about trafficking and the impact it is having on children and adults from countries around the world.

Before I attended the conference I'm happy to admit I did not have a good understanding of the issue of human trafficking nor the fact that it could be a serious issue in Reading.

For this reason I'm really grateful to Catherine for making me aware of the issue and for choosing to hold the conference in Reading.


If you are interested in finding out more I would suggest a good place to start would be the UK Human Trafficking Centre website.

The UHTC provides a useful working definition of human trafficking:

'In the simplest terms, human trafficking is the movement of a person from one place to another into conditions of exploitation, using deception, coercion, the abuse of power or the abuse of someone’s vulnerability. It is entirely possible to have been a victim of trafficking even if your consent has been given to being moved.

There are therefore three constituent elements:

The movement – recruitment, transportation, transfer, harbouring or receipt of persons.

The control – threat, use of force, coercion, abduction, fraud, deception, abuse of power or vulnerability, or the giving of payments or benefits to a person in control of the victim.

The purpose – exploitation of a person, which includes prostitution and other sexual exploitation, forced labour, slavery or similar practices, and the removal of organs.

According to Stop Trafficking UK:


'Human Trafficking is the fastest growing criminal activity in the world, with a turnover exceeding US$10 billion. Estimates suggest that the number of people trafficked annually is between 600,000 (US Government figure) and 3 million (International Labour Organisation figure).'

And according to the Home Office:
The Coalition Government launched a new anti-trafficking strategy in July 2011 in attempt to strengthen support for victims of human trafficking. Measures included:-
Anti-Trafficking Conference - Reading - October 2011.

At the conference organised by Catherine Bearder we heard from a range of anti-trafficking campaigners including - former Police officrs, charity workers, Baroness Hamwee (Lib Dem) and the founder of a local anti-trafficking group in Oxford.


The conference was organised by Women Liberal Democrats although it was free and open to everyone.

People from across our area attended including a number of Liberal Democrat activists from Reading.

Sadly no other political parties attended.

It was not a party political meeting as it is very important we seek to find common cause and a consensus that action needs to be taken by everyone on this issue.

Although no Labour, Conservative or Green party activists came to the conference I was really pleased when a couple of weeks later current Mayor of Reading Cllr Deborah Edwards highlighted Anti-Slavery Day at the start of our full Council meeting.

Everyone who spoke at the Reading conference agreed that raising public awareness is key to stopping trafficking.

The thinking behind the conference was to draw peoples attention to the scale of human trafficking in the UK and the South East in particular and also to encourage people to campaign for action to reduce trafficking in their area.

I found the issues highlighted in the Conference around the trafficking of women and children in the UK and across the South East including down the road in Slough very disturbing and as a result I was prompted to find out more about what is being done in our area.

Part of the conference was about exploring setting up local groups.

I joined a table of Reading-based activists - including people from local churches and charities.

I took as an action the task of finding out what was being done in our area to tackle trafficking.


What's being done to tackle trafficking in Reading?

Based on the presentations I heard and information that was presented about the sheer scale of human trafficking in the UK at Catherine Bearder's Conference I find it hard to believe that this issue is not an issue in Reading.

Afterwards I did some Internet research about trafficking in our area:-
And this is just the people that the Police have managed to identify.

With this in mind and keen to arm myself with as many facts as possible I wrote to the Chief Executive of Reading Borough Council asking him what action local agencies were taking to stamp out human-trafficking.

I waited nearly two months for a response but finally received it today.

I've attached it below.

'We review each and every reported crime, seven days per week during our daily management meeting. Included in this meeting are representatives of our Protecting Vulnerable Persons Unit including Domestic Abuse, Child abuse Investigation and Intelligence staff. Additionally, the neighbourhood inspectors attend.

Any intelligence or evidence of human trafficking coming to our notice would be a) be responded to at the time with an appropriate grading and b) be discussed and picked up by the appropriate team.

In terms of the wider issue i.e. trafficking within the gambit of 'organised crime', this would be picked up a higher level than local policing agencies such as the Serious and Organised Crime Agency (SOCA) at a national level. The agency could work with local forces where appropriate.

As it stands, we have not been made aware of any human trafficking issues in Reading. This is not to say that it does not exist.'

What is the Council doing to tackle trafficking in Reading?


'The LCSB has already ensured there are procedures in place for vulnerable children. In particular Chapter 28: Trafficking & Exploitation (Revised June 2010).

These procedures include direct access to Home Office guidance and includes a link to the Tackling Trafficking Toolkit on the Criminal Justice System website. It was further revised in June 2010 to include a reference to the National Referral Mechanism.

We have no child to our recent knowledge referred directly in this circumstance, although have of course had a number of unaccompanied asylum seeking children/young people we are very minded about in relation to their vulnerability to trafficking.
We have also recently been informed to be extra vigilant in relation to the Olympics as the Met Police have told Windsor & Maidenhead they may be expecting an increase in activity - hence we have briefed team managers already.

In brief, we are aware and alert although the extent of known issues is tiny at the moment in Reading. We cannot of course report things that has as yet not come to the attention of ourselves or Police.'


'From a Sex Workers Advisory Group perspective, human trafficking and exploitation will be referred to in the emerging Sex Workers Strategy and we are looking at how we can identify the extend of the issue in Reading.

There will also be reference made to ensuring that staff beyond statutory agencies who may come into contact with individuals who are trafficked into the country, receive appropriate training.'

On the one hand I'm pleased to hear that as a local authority Reading Borough Council is reviewing its policies and procedures in relation to trafficked children.

Once it has been published I will be scrutinising the new Sex Workers Strategy to check it pledges action around reducing harm to trafficked women in Reading.

On the otherhand I was disappointed at the time it took the Council to respond to my request for basic information.

To my knowledge this information has not been widely shared amongst councillors before.

Maybe no-one else has asked for it?

Also, the response from the Police risks sounding complacent.

I would like to see Thames Valley Police raising public awareness in Reading about how they might be able to spot the telltale signs of trafficking in their area.

This is what is happening in Oxford where OXCAT - Oxford Community Against Trafficking is campaigning to raise awareness and encouraging reporting.

Their Open Your Eyes campaign suggests people should look out for the following:-
For much more detailed information, visit http://www.blueblindfold.co.uk/

So what happens next?

Catherine Bearder MEP has raised concerns about the impact the forthcoming Olympics could have on the problem of human trafficking - suggesting that it could lead to an increase in women being trafficked for sex in the South East. Catherine will contiue to challenge agencies at local and European level to act.

I will continue to ask questions of local agencies and to challenge them around their responsibilities to vulnerable children and adults.

You can add your name to the Human Trafficking Foundations' database of supporters.

I've written this blog post in part to raise awareness locally. Please do the same in your community.

We should not tolerate modern form of slavery in any of its forms.
Posted by Cllr Daisy Benson 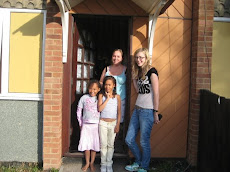 Cllr Daisy Benson
I am Leader of the Liberal Democrat Group on Reading Borough Council and ward councillor for Redlands.

Promote your Page too